The use of tobacco products is dangerous to every part of the body. 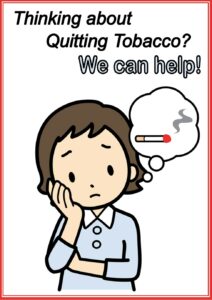 According to the Centers for Disease Control and Prevention, cigarette smoking remains the leading cause of preventable death and disability in the United States, despite a significant decline in the number of people who smoke. More than 16 million Americans have at least one disease caused by smoking. This amounts to $170 billion in direct medical costs that could be saved every year if we could prevent youth from starting to smoke and help every person who smokes to quit.

But there is hope

The CDC reports that after you smoke your last cigarette, your body begins a series of positive changes that continue for years.

Thirdhand Smoke
Have you heard of thirdhand smoke? It is the nicotine residue that is left on surfaces, including walls, rugs, clothing, and furniture, by tobacco smoke. Thirdhand smoke is residual nicotine and other chemicals left on indoor surfaces by tobacco smoke. It gets on everything and poses a danger to people and pets who are around it. It contributes to indoor pollution. Learn more about the dangers of Thirdhand Smoke.

E-Cigarettes
And if you think E-cigarettes or vaping is safe, think again. They are also dangerous to your health. Learn more about E-Cigarettes

If you use tobacco and would like to quit, contact us. We are here to help. Learn more about quitting: Build Your Quit Plan | Quit Guide | Quit Smoking | Tips From Former Smokers | CDC